The night of August 13th was ripe with energy. The August Concert Series was nearing the end of its lifespan, yet the crux of its vitality was still engorged. Luis Sanchez (Riverside, CA) of the cryptic and vibrant noise/ambient/drone project Typical Apache is also a regular of The dA’s concert series. He was kind enough to construct this neat little write-up of one of our nights. Thanks Luis. Another thanks to KSPC for getting the gears rolling in constructing the event that took place that evening. ❤ ❤ ❤ 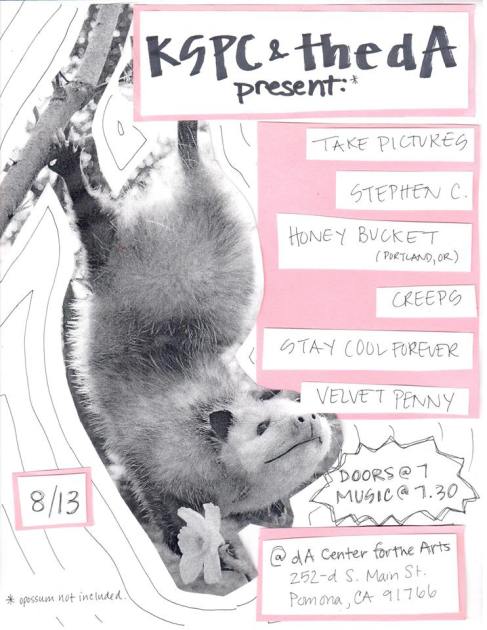 Velvet Penny was first in line and started off the show well with a throbbing drum and bass line that kept a steady beat.  The singer grabbed a guitar and proceeded to strum out guitar riffs that were smothered with overdrive. The guitar was jangly and broke into sheer noise at times when the strings were scratched. The bass was mixed high within the landscape of the instrumentation, which serves as a good counterpoint with the guitar that tends to explore multi-faceted tonal terrains. The new Velvet Penny is much different from the old act as this one features consistent Krautrock drumming, steady bass lines and guitar that is warmed with overdrive albeit not in a markedly heavy way. Marlena (guitar/vocals) has cast off the pretty acoustic act for something with a more art rocky flair. Next in line was Stay Cool Forever, which is one of the few acts who I have grown to really enjoy recently not only as a recording entity but as a live act. Stay Cool Forever’s songs remind you of an elementary school field trip to the fair. Enmeshed within the fabric of the songs is a sort of childlike playfulness even if some of the songs deal with mature issues, such as the ever bubbly Don’t Grow Up which was the last song to be performed. Don’t Grow Up is the only song that I recognize by itself, which is most likely due to the fact that I have listened to it about 30 times since first hearing it only a few weeks ago. “Never grow up, grow up, you don’t gotta grow up,” Yergens croons through his microphone. The lyrics work perfectly with the rest of the other songs which are uplifting regardless of the subject matter. 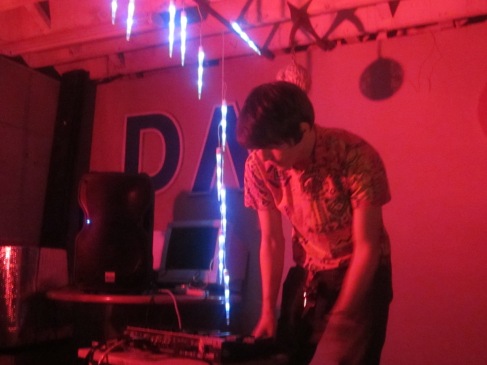 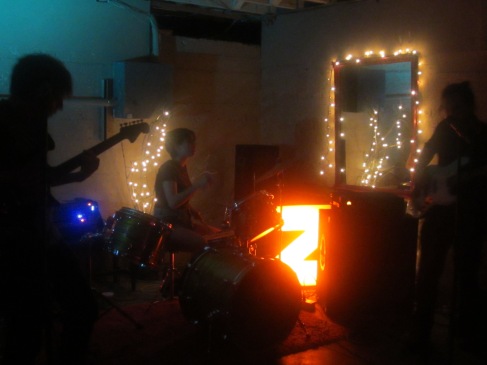 Third in line was Creeps who can be described as a surf rock type band but one that escapes any sort of kitschy aesthetics. They seemed like an honest effort. The drums were consistent and pounded away in a driving fashion. The guitar was also jangly but danced well with the bass, which is mixed in high within the framework of the songs. The songs are consistent with one another as one track does not diverge wildly from another, moreover they don’t seem to diverge at all. They are comfortable with their consistent bass and drums. Oddly enough, that does not seem to get tiring. Next up was Honey Bucket. To call them garage rock may be due to the fact that they are on Burger Records, a wonderful label that has put out more tapes than you can imagine. The first song started off with a brief spurt of noise that then dissolved into a soft guitar strumming. It then moved into a progression that is reminiscent of Roadrunner by The Modern Lovers, lending to the idea that they are influenced by older garage rock acts. Another one of their songs opens up with guitar that is highly mixed. In the middle of the track there is a sort of break up that may be described as almost math-rock. 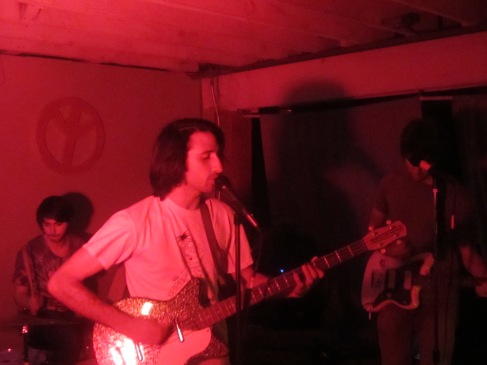 Take Pictures, the fifth band to perform that night, included drums that were very cavernous and a guitar tone that is reminiscent of No Age. Whether this is something imagined because the guitarist told me No Age are his favorite band is something I’m not completely sure of. The second song starts off slowly which included a soft drum intro with light taps on the hi-hats. The guitars are sprawling and the cavernousness continues. They have an interlude of guitar noise and ambient samples which seems to be activated by a sampler. The lack of a second guitarist and bassist to form a “traditional rock band” is not felt at all with the guitar and drums hammering away. Lastly was Steven Corpus aka Voice Altar. The first song started off with samples of what appears to be sirens from hospital cars. There is also a sample that sounds haunting and not unlike a voice at the Haunted Mansion at Disneyland. After an initial start-up there is another pause and then return to the same performance that was happening before. Throughout the beginning of the performance there was a lot of start and stopping which was apparently due to technical difficulties. After that he progressed into an avant-garde instrumental piece that included many cacophonic sounds that were layered together. Throughout the entire performance there is a lushness that is held within each track, albeit lushness that is somewhat unsettling as a tonal experience. He then proceeds to do a sort of vocalization that seems almost rap like although his words are unperceivable. The performance then moves into another song, this time with rhythms that are much more lax, sparse, and even angelic at times before being interrupted with the occasional noise burst.

Questions, comments, concerns on booking or other things specific to The dA’s Concert Series should be directed to:
daconcertseries@gmail.com

For more information on The dA and it’s concert series check out our website: http://www.dacenter.org/

The dA Center for the Arts